Helene Schjerfbeck Exhibition opens to Acclaim at the Royal Academy

Helene Schjerfbeck Exhibition opens to Acclaim at the Royal Academy

Born in 1862 one year before the salon des refuses in which Edouard Manet came to prominence, Schjerfbeck began to study art as a child in Helsinki and was recognised as a prodigious talent. In the 1880s she spent time in Paris studying in the private academies as the Ecole de Beaux-Art was not open to women. Like many artists she spent the summer months in artist colonies or back in Helsinki. In 1883 she travelled to Pont-Aven, where she met international colleagues and began to paint like Jules Bastien Lepage, whom she also met.

At the end of the decade she spent two seasons in St Ives, staying with Adrian Scott Stokes, who was married to Schjerfbeck’s painter friend, Marianne Preindelsberger, who had been with her in Paris. Further travels in the 1990s took her to Vienna, Italy and St Petersburg where she copied old master paintings that provided her with as much of an artistic eductation as her formal studies. Visits to the museums there and in Paris and London were of foundational importance to her and she continued throughout her long career to reference them in her paintings.

From the end of the 1890s Schjerfbeck returned to Finland for the rest of her life other than her final two years. At first she lived and taught in Helsinki but soon moved out of the city to more provincial towns. Although she stayed in touch with artistic events it was largely through magazines and visits of friends.

Schjerfbeck painted a wide range of subjects including history paintings and genre paintings in her early years, which she exhibited in the Paris salon and elsewhere, but she soon tired of conforming to the expectation of painting works that celebrated Finnish national history and began to concentrate on portraits and self-portraits. These are the works that form the central core of the exhibition. While early portraits appear to attempt to enter psychologically into the sitter, by the early twentieth century Schjerfbeck was more interested in the depiction of the sitter consumed by self-relfection in a series of paintings concerning interiority. Many of her sitters refuse the gaze while others seem to be masked. Schjerfbeck was influenced by Japanese woodcuts as well as the paintings of Watteau and Chardin and other Rococo artists whose work she saw in Paris and reproduced in the French art magazines to which she subscribed throughout her life.

The self portraits also transition from openness to a masked image, from excitment and happiness to a maudlin, anxious morbidity. The twenty self-portraits in the show are among the most haunting in the history of twentieth century art.

This is the first solo exhibition of Helene Schjerfbeck to take place in the United Kingdom. While very well known in the Nordic countries, in western Europe she has been given solo shows only in Hamburg and Paris (2008) and Frankfurt (2014). The Royal Academy exhibition is thus a rare opportunity to see her work. The last time a group of her works was shown in London was in Dreams of a Summer NIght at the Hayward Gallery (1986).

An all day symposium about Schjerfbeck’s work will be held at the Royal Academy on Friday 27 September and Jeremy Lewison will be giving a lecture at the RA on 13 September at 11 am. 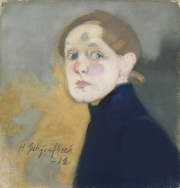 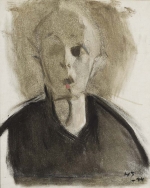 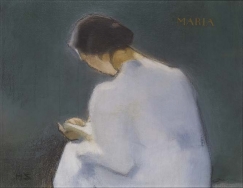